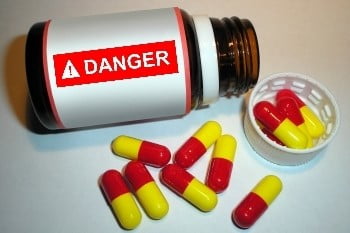 A trainee dental nurse has recently pleaded guilty to forging prescriptions and stealing from pharmacies across the county of Gwent in south-east Wales. Although aged only 29 she pleaded guilty to three charges of false representation, three of theft by employee and three of making a false prescription as well as sixty other matters related to feeding her own drug addiction.

The prosecutor told the court that over a period of six months the trainee nurse had stolen 23 prescription forms from the workplace which were then forged and presented for fulfilment to different pharmacies – in fact, the first form stolen was just eleven days after she started work at the dental practice.

“She had been dependant on the dihydrocodeine pain killers and said she was not in her right frame of mind,” the prosecutor added. “There was some planning involved in the offences, she forged the names in her own name, her maiden name, mother, sister, next door neighbour, her friends and a variety of addresses and members of the public who were registered as patients where she worked.”

The defence pointed out that his client suffered from chronic migraines and said that in addition to her normal prescribed medication she was using anything she could to “alleviate the problem.” He added, “The medication she was on has had a significant effect on her rational thinking” and that she shows a “significant degree of remorse” and her addiction to codeine had been “fully addressed.”

Addiction to painkillers is an often overlooked angle of drug addiction, even more so than addiction to other prescription drugs, as so much simple pain medication is available over the counter or with little to no followup discussion from a GP. The ease of acquisition and perceived legitimacy of these drugs does not mean that they aren’t addictive, as this trainee nurse’s sad case clearly shows, and it is often far too easy for people to develop a physical and psychological addiction to their painkillers, especially those like codeine which have “feel good” side effects such as elation or sleepiness.

While taking codeine normally according to medical instructions is perfectly safe, however taking large or frequent doses causes an increased risk of severe side effects such as nausea, constipation, breathing problems and seizures. When combined with alcohol or other drugs a codeine addiction can rapidly lead to death. Here are some common signs of codeine addiction to watching out for in yourself or someone close to you:

If the answer to any of these questions is yes then you could be looking at someone with a genuinely dangerous addiction. Get in touch with Rehab Recovery for free help and advice on 0800 088 66 86 today, or send us a message requesting a callback and we’ll give you a discreet ring for a chat about your concerns.