Last year Liberal Democrat Politician Charles Kennedy died of a ‘major haemorrhage’ due to alcoholism. Whilst the exact cause of his bleeding is unknown, medical professionals agree the most likely cause was an acute condition known as ‘bleeding oesophageal varices’.

This is a medical term and one most people are unfamiliar with.

So just what is ‘bleeding oesophageal varices’?

The aim of this post is to explain the condition, including symptoms, diagnosis, treatment, management and prevention.

Bleeding oesophageal varices is a condition caused by enlarged veins surrounding the oesophagus. The oesophagus is a tunnel connecting the mouth to the stomach. ‘Varices’ is derived from the Latin word ‘varix’ meaning ‘top’. This condition is characterised by swollen veins in the lower oesophagus, known as ‘gastric varices’, similar to ‘varicose veins’ commonly found in middle-aged women’s legs.

Bleeding oesophageal varices is generally caused as a result of a condition known as ‘cirrhosis’ i.e. scaring of the liver. Scares in the liver disrupt the flow of blood in and out of the liver. Blood backs up into the ‘portal vein’ causing pressure in the portal void. This condition is known as ‘portal hyperextension’. Pressurised blood flows into nearby veins located in the oesophagus. The walls of these veins are very thin and burst under the excess pressure, thus causing a potentially fatal haemorrhage.

Unfortunately, symptoms do not arise until veins around the oesophagus burst. The condition is thus ‘asymptomatic’. Once veins burst, blood and other fluids seep out into the body. The sufferer feels confused and fatigued. Blood is vomited in great quantities, a condition known as ‘hematemesis’. A fall in blood pressure occurs and sufferers may experience shock.

Bleeding oesophageal varices is a medical emergency. If you suffer the above symptoms you must call 999 immediately. 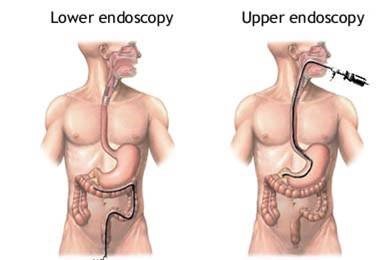 A camera is attached to a tube allowing the doctor to determine the site of bleeding. A blood test is also carried out. Other forms of detection include a CT or MRL scan.

Once bleeding oesophageal varices is diagnosed the doctor wastes no time in treating the condition. If treatment is not sought quickly then patients’ risk coma and death. First and foremost the doctor must stop internal bleeding. This is typically achieved via ‘endoscopic variceal ligation’. Endoscopy locates the site of bleeding. Now a doctor inserts a rubber band around the varices in order to prevent bleeding as illustrated in the below image. 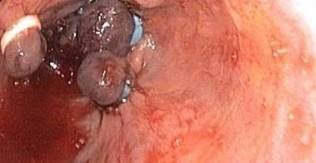 Another method of treatment used to prevent bleeding involves the use of ‘clotting agents’. Endoscopy is employed to locate the site of bleeding. The doctor now injects a clotting agent such as Sandostatin directly into the varices. This procedure is known as ‘sclerotherapy’. Clotting of the blood thus prevents further bleeding.

Patients may be put on a ventilator. This prevents patients from drowning in their own blood. Blood and other fluids are replaced through an IV blood transfusion.

Once the bleeding stops patients have prescribed medications designed to prevent further bleeding. Nitro-glycerine and/or beta blockers are generally prescribed. These drugs reduce pressure in the oesophageal veins. In severe cases of liver cirrhosis patients may undergo a surgical procedure known as ‘shunting’. A procedure known as a transjugular intrahepatic portosystemic shunt (TIPS) is carried out. A tube is used to connect the portal vein to the hepatic vein. Blood is thus diverted away from the high-pressure region that causes bleeding oesophageal varices.

Since bleeding oesophageal varices is predominantly caused by alcoholism it makes sense for those affected to seek treatment to prevent their drinking, preferably through a private alcohol rehab clinic. Those diagnosed with cirrhosis are advised to see their GP regularly. If the bleeding oesophageal varices occurs once, the condition is highly likely to return within the next two years.

Bleeding oesophageal varices is also caused by hepatitis B and C. To prevent contract this disease we advise people not to engage in unsafe sex.