Adverse childhood experiences (ACEs) are a significant risk factor for substance use disorders and can impact prevention efforts.

Adverse childhood experiences (ACEs) are stressful or traumatic events, including abuse and neglect.

They may also include household dysfunction such as witnessing domestic violence or growing up with family members who have substance use disorders.

ACEs are strongly related to the development and prevalence of a wide range of health problems throughout a person’s lifespan, including those associated with substance misuse.

ACEs are a good example of the types of complex issues that the prevention workforce often faces.

The negative effects of ACEs are felt throughout the nation and can affect people of all backgrounds. 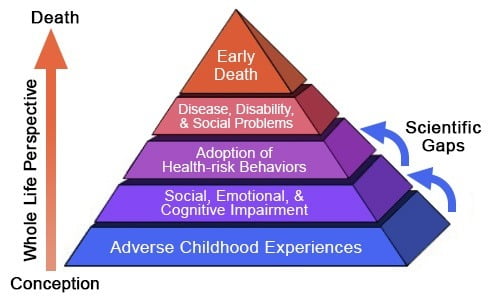 Many studies have examined the relationship between ACEs and a variety of known risk factors for disease, disability, and early mortality.

The Division of Violence Prevention at the Centers for Disease Control and Prevention (CDC), in partnership with Kaiser Permanente, conducted a landmark ACE study from 1995 to 1997 with more than 17,000 participants.

Preventing ACEs and engaging in early identification of people who have experienced them could have a significant impact on a range of critical health problems.

You can strengthen your substance misuse prevention efforts by:

Research has demonstrated a strong relationship between ACEs, substance use disorders, and behavioural problems. When children are exposed to chronic stressful events, their neurodevelopment can be disrupted.

As a result, the child’s cognitive functioning or ability to cope with negative or disruptive emotions may be impaired. Over time, and often during adolescence, the child may adopt negative coping mechanisms, such as substance use or self-harm.

Eventually, these unhealthy coping mechanisms can contribute to disease, disability, and social problems, as well as premature mortality.

ACEs and Substance Use

In This Article
1. ACEs and Prevention Efforts
2. ACEs Research and Behavioral Health