A Guide to Transcendental Meditation

A Guide to Transcendental Meditation

Scientists estimate that homo sapiens have been around for at least 100,000 years. [1] If you were to take a baby from 50,000 years ago and raise it today, it would function as any normal child would.

This is because over time, our brains are similar. But we also know that our ancestors created huge megalithic structures without the technology we enjoy today. How was that possible?

The simple answer is they operated on a different level, a primordial consciousness. That alone gave them the ability to conceive of a way to create those grand and impressive structures. We now live in a society dominated by the mind – but the mind cannot show us what we are truly capable of.

It is designed to keep us safe, not build The Great Pyramid. Fortunately, we can reconnect to our primal consciousness via a re-emerging trend: transcendental meditation.

What is transcendental mediation?

Transcendental meditation (TM) is a practice of silent mantra meditation. It survived thousands of years via oral tradition in India and was brought to the wider world by Maharishi Mahesh Yogi. [2]

TM guides the attention past all the distractions of the mind straight to pure consciousness. From our simple inner state of being, we live a more genuine and fulfilling life. [3]

Where did it originate?

The technique of transcendental meditation originated in India. It has been passed down orally from teacher to student for thousands of years. Maharish Mahesh Yogi (1917 -2008) learned TM from his teacher in the 1950s.

How does it work? 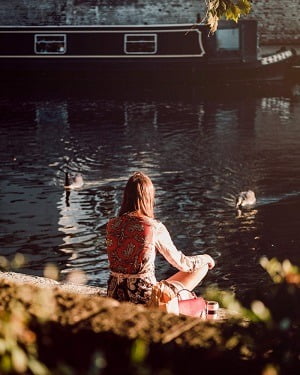 How do I practice transcendental meditation?

Below, we have listed seven simple steps to transcendental meditation that you can practice from anywhere in the world:

What is a mantra?

You may be wondering “what is a mantra?”

A mantra is a word, phrase, sound, tone, or likewise, that puts the mind is a certain state. The word “mantra” itself is a Sanskrit compound word, meaning “instrument of the mind.”[6] Thus mantras are used during meditation to increase focus and to maintain a deeper mental state.

When practicing transcendental meditation, the mantra you repeat is tailored to you personally, as given by your TM teacher. As you meditate and silently think your mantra, it will guide the mind to a much simpler part of your consciousness. This will bring you deeply in touch with your inner, subconscious self.[7]

Your teacher will work with you to assign a specific mantra to use. They usually are not actual words; mantras work best as simple sounds and utterances. When your mind receives a word, it immediately scrambles to figure its meaning.

Therefore mantras are simple and help to focus on getting your mind to the inner state. As you think your mantra, focus on extending and intoning the noise in your head. Elongate the vowel sounds.

Some examples of mantras that you can perform are listed  below:[8]

What are the health effects?

By returning to an inner state of being, we can heal many maladies facing our current society.

What sort of problems does it help?

Some veterans have reported being more productive and energetic than previously before after practising transcendental meditation. They experience better sleep and their nightmares cease.[12]

TM can be used to relieve stress and anxiety, assist with attention-deficit hyperactivity disorder (ADHD) and much more.[14]

On what does transcendental meditation have a positive impact?

Transcendental meditation can have a positive impact on various aspects of your life. Here are some of the most commonly noted aspects:

In 1996, Jane Schmidt-Wilk et al published a paper reviewing the effects of transcendental meditation practice on businesses and employees.

Observing previous studies in the 1970s, the researchers noted that full-time workers (both supervisors and employees) who practised transcendental meditation experienced the following:

A study published in the Education journal followed the story of 189 middle school students in California performing below-average. Of the students assigned to practice transcendental meditation over the course of a year, 41% performed much better in Math and English, compared to 15% of non-meditating students.

There is something about reconnecting with the primal consciousness, where you delegate your time and energy more intelligently. The mind can distract us with various colours and ideas, but the deep inner spirit knows what we truly desire.

Transcendental meditation puts us in direct contact with our own spirit, decreasing anxiety over the next move. We experience less stress because we realize how valuable our time is. We become more focused on our passions, which excites us and reminds us daily of why we live.

The consciousness shifts from the busy mind – constantly racing – to rested alertness. With the busy mind, we juggle deadlines, likes/dislikes, shame, trivia, and countless other distractions.

From rested alertness consciousness, we recognize the beauty of taking our time, living passionately, and committing to one thing at a time. This does not sacrifice our intelligence, as proven above. transcendental meditation actually increases mental capacity, decision making, and productivity.

We also become more comfortable with who we are, being more open, humorous and feeling connected to others.

In practising transcendental meditation we understand we are more than just mind – we are pure consciousness itself. When we reach that state during meditation every day, life becomes less of a race to the finish.

We learn every minute is an opportunity to enjoy life, to generate our own happiness from within. Therefore we become more satisfied with life circumstances, as we see past the anxious messages of the mind.

How is transcendental meditation different from other techniques?

The mantras used are very simple and effective. Studies have also proven how insanely beneficial transcendental meditation is for the entire brain, even from the first session.

Mindfulness and transcendental meditations may both deal with the mind. However, they deal with it in completely different ways.

Mindfulness is useful in understanding the games that the mind can play; transcendental meditation is useful for reaching a state of pure awareness that lies further than the mind.

Can you perform transcendental meditation alone?

If you do need help, a quick Youtube search will bring up a few videos demonstrating how transcendental meditation is done.